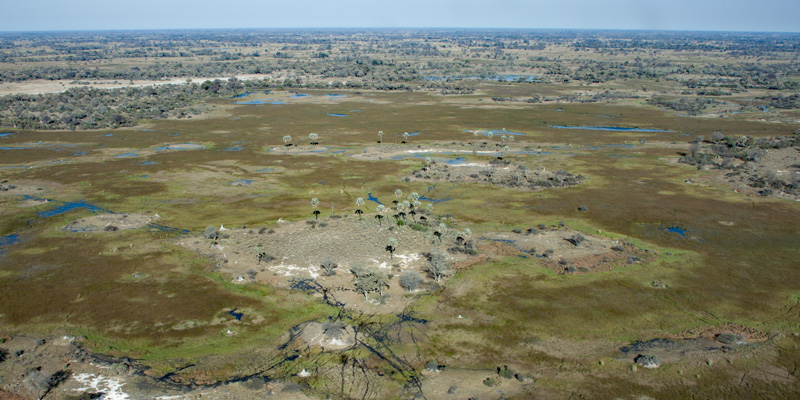 Formation of the Okavango Delta

The Okavango has its origin in the Angolan highlands and has a total length of 1700 kilometres. In Angola the river is called Cubango. From here it flows south forming a 400-kilometre-long border between Angola and Namibia and is called the Okavango River.  The river then crosses the Namibian Kavango Region where its rapids called the “Popa Falls” just before the Botswana border can be found.

After flowing into Botswana the river starts to percolate into the Kalahari Basin, thus never reaching the ocean. This inland delta extends over 250 km from the border with a variation of height of only 60 metres. The Moremi Game Reserve covers the largest area of the Okavango about 100 to 250 km after the border.

This makes the Okavango Delta the largest inland delta worldwide. It covers an area of about 15.000 km². During the rainy season this area increases to more than 20.000 km². Due to the dry weather conditions during winter the waters of the Okavango only reach the inland delta with a few months delay, namely when the high waters after the rainy season flow south. Thus it may happen that the Okavango water levels drop drastically in its middle and lower course. When the rainy season arrives the river swells to a torrential stream, feeding its swampy delta with sufficient water. On average about 10 billion m³ of water are annually supplied by the river to its delta.

Biodiversity of the Okavango Delta

The Delta boasts an unbelievable variety and concentration of African game. Over 100 mammal species, more than 400 bird species, dozens of reptile and amphibian species. Among them are elephant, buffallo, hippos and crocodiles, carnivores like lions, leopards and cheetahs. The endangered African wild dogs occurs in large packs. Some rare antelope species are also found here, like sitatunga, letschwe and waterbuck.

Herd of elephants from above

Hippos in the Okavango Delta

Lioness in the Okavango Delta

Elephants in the Okavango Delta

Safaris, Accommodation and Camping in the Okavango Delta

Depending on the water levels safaris take place on land and water. On water the normal mode of travel is by so-called mokoros, wooden dugout canoes steered by long poles.  Today the wooden mokoro is frequently replaced by aluminium canoes, which are safer when it comes to encounters with crocodiles or the mighty rulers of the Delta, the Hippos.

Numerous charter flight companies offer scenic flights from which the unique landscape can be viewed from above.

The Okavango Delta offers a large number of luxurious accommodation facilities and distinguished tented camps. As most accommodations are found in isolated locations in pristine nature, often only reachable by plane and are very highly priced, the Delta has been spared mass tourism. “Quality not quantity” the moto of Botswana tourism is especially true for the Okavango Delta.

During recent years some more budget alternatives have established themselves.