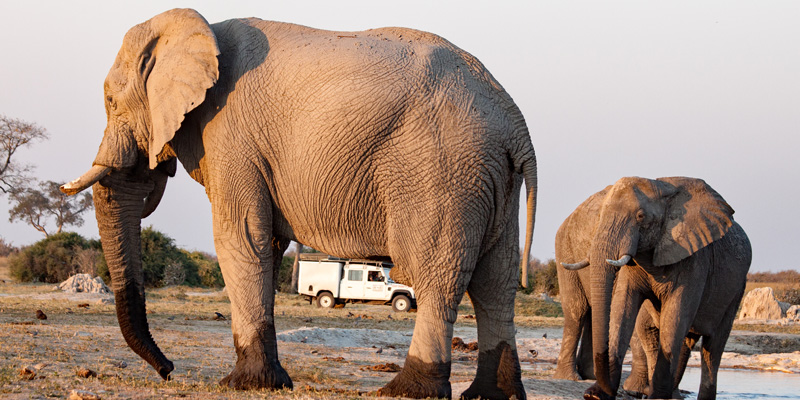 The Chobe National Park is situated in the north-east of Botswana with the Chobe River marking the northern border of the park. The Chobe River descends from Angola where it is called Cuando / Kwando and later Linyanti. The park stretches south over an overall area of about 10.600 km² and borders the Moremi Game Reserve for a little stretch in the south-west.

Already in 1931 the idea of a protected game reserve was born, followed by a hunting prohibition of a 24.000 km² area in 1932, which was extended to 31.000 km² a year later in 1933. Due to the heavy presence of the Tse Tse fly the whole project was not further pursued. Only in 1957 the original area of 21.000 km² was proclaimed as game reserve. In 1960 the area was reduced and proclaimed Chobe Game Reserve.

In 1967 the Chobe received the status as National Park and became the first National Park in Botswana. Originally the park was much smaller and was still home to a local village. Through relocation of the village and extension of the park it finally reached its present size in the years 1980/87.

Regions of the Chobe National Park

Forming part of the Kalahari Basin the complete area of the park is flat, sandy and in some areas even swampy. Ideal time to visit the park is during the dry season from April to October.

The best known and most frequented part of the park is the Chobe Waterfront in the northern area of the park. High, tropical trees offer shade to numerous animals. Further south in the Linyanti region swampy areas are found – this „little Okavango Delta” is known for its remoteness and more exclusive tourism. The area around Savute is famous for its elephant hunting lion prides. During the dry season the wildlife is forced to come to the watering holes, thus guaranteeing excellent game viewing.

Wildlife in the Chobe National Park

The amount of wildlife in the Chobe NP is immense, boasting the highest wildlife populations of all game reserves in southern Africa. Especially the elephant populations of 50.000 to 70.000 (numbers vary) pose a serious challenge for the game park, which ideally should host about 25.000 elephants to keep a healthy balance. Thus, it is expected that some culling will take place in the near future, as relocation into other areas is not an option due to over-population of elephants. Hereby the challenge is that culling should take out complete herds to avoid surviving individual being traumatized and becoming aggressive toward humans.

Apart from the large amounts of elephants, herds of zebras and wildebeests, uncountable antelopes, many cats of prey and hyenas and lots more are found.  At the riverside hippos, crocodiles, buffaloes and many other animals are found. More than 440 bird species are home to the Chobe National Park.

Tropical trees at the Chobe river

Infrastructure of the Chobe National Park

Like in most game reserves there are no surfaced roads, which means that a sturdy four-wheel drive vehicle is required throughout the year, when visiting the park. The park is situated in the malaria area, just like the Okavango Delta and Moremi NP, and the relevant precautions should be taken before visiting the area.

In and around Kasane a lot of accommodation facilities, some very luxurious, are found. The whole park offers well equipped bush camps and lodges and overall one can say that the touristic infrastructure is excellent. Those staying over in Kasane have the advantage that the famous Victoria Falls are merely 70 km away.

Future plans intend to include the Chobe National Park into the envisaged “Kavango-Zambezi Transfrontier Conservation Area” (KAZA). This huge 350.000 km² large area which is to be realized together by Botswana, Zambia, Zimbabwe, Namibia and Angola with joint efforts in place since 2003, has the goal to further improve the conservation of animals – especially elephants – and also to improve tourism.  One of the visions is to create a special park visa (KAZA UniVisa), allowing guests to enter the park from all countries involved and to travel within the park without border controls.