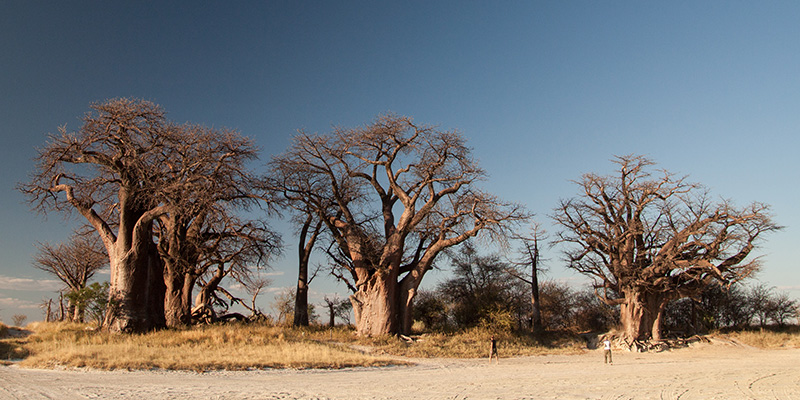 The fascinating landscapes, a group of seven mighty baobab trees – the famous Baines Baobabs – as well as a waterhole frequently visited by a pride of lions are the main highlights of the Nxai Pans National Park.

The park derives its name from a curved stick ‘Nxa’, which the San used to dig out springhares and which the form of the park resembles. The area of the park belongs to the settlement area of the San (Bushmen).

Location and origins of the Nxai Pans National Park

The geological formation of the Nxai National Parks goes hand in hand with the formation of the Makgadikgadi National Park. The pans formed when the prehistoric Makgadikgadi Lake dried up. The Nxai National Park has two main pans, the Nxai Pan and the Kudiakam Pan in the south.  During the years 1950 to 1963 cattle herds were driven through the park on the so-called Old Trek. This route was cut by the establishment of the vetenary fence to fight the Foot and Mouth Disease.

In 1970 an area of 1676 km² around the Nxai Pan was declared as game reserve. In 1992 the Kudiakam Pan was added increasing the area of the reserve to 2578 km² and changing its status to national park, which now also included the seven giant baobabs, the Baines Baobabs.

Wildlife and attractions in the Nxai Pans National Park

The Nxai Pans National Park is situated on the migration route of large animal herds moving between the Okavango Delta, the Hwange National Park in Zimbabwe and the grasslands in and aroud the Magkgadikgadi Pans National Park. Lions, giraffes, kudus, jackals, springboks, impalas and bat eared foxes can always be found in the park. During the rainy season from December to April oryx antelopes, elephants and thousands of zebras enter the park. Ostriches and numerous bird species add to the game viewing experience.

As many animals give birth during the rainy season, for example springbuck in December and zebras in March/April a lot of mothers and their young can be seen in the salt pans.

Elephant at the waterhole

Wildebeest at the waterhole

Zebras after the rainy seasons

PElephant at the campsite in the Nxai Pans National park

On the road in the Nxai Pan National Park

Another famous attraction are the Baines Baobabs. They consist of a group of seven large baobabs on the edge of the Kudiakam Pan. The trees are about 1000 years old and over 20 metres high. The discoverer and painter Thomas Baines painted the trees in 1862 and made them well-known. Hence the trees were named after him. As the trees grow extremely slow, the stem circumference increases by 1mm a year, pictures and photographs of today depict virtually the same scene than 100 years ago.

The famous IMAX movie ‘Roar: Lions of the Kalahari’ was shot in the Nxai Pan National Park .

Infrastructure and tourism in the Nxai Pans National Park

The Nxai National Park does not offer any possibilities to buy supplies. There are no fuel stations and no restaurants. The next fuel station is in Gweta about 65 km away. Travelers into the park have to be completely self-sufficient or have to book a guided tour.

The Nxai Pan Camp was built in 2009 and is the only lodge inside the park. There are two campsites in the park: South Camp (with water) and Kudiakam Pan (no water).

Another tip: It is advisable to visit both parks, the Makgadikgadi and the Nxai National Park during both seasons (winter and summer). In that way the changes in nature become best visible. If that is not possible one should at least spend some time in both parks.