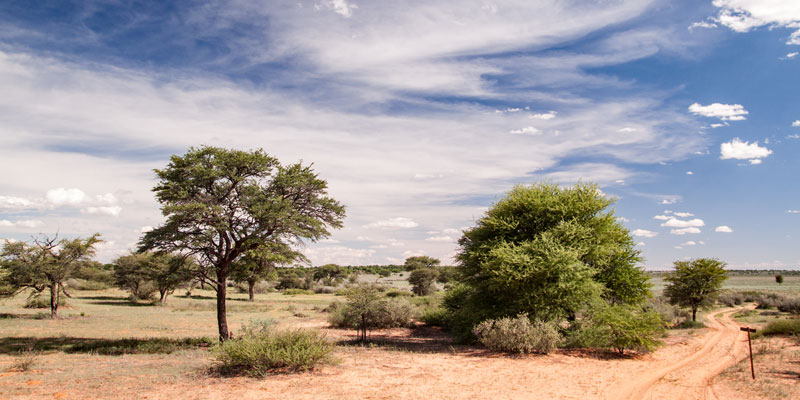 The Kgalagadi Transfrontier Park (KTF) is one of the largest nature conservation areas in the world and is nearly as big as Switzerland, covering an area of 39.000 km² with three quarters of the park situated in Botswana and one quarter in South Africa.

Short history and geography of the KTP

The Kgalagadi Transfrontier Park was established in May 2000 and is the first project of the so-called peace park project in southern Africa, which aims to conserve and protect wildlife.

Two large, ephermal rivers meander through the park, the Nossob and the Auob River. Both are dry rivers, but they provide underground water for grass, trees and shrubs. During the rainy season these rivers might carry water for a couple of days.

Very characteristic for the park are the red sand dunes of the Kalahari.

Wildlife in the Kgalagadi Transfrontier Park

The Kgalagadi Transfrontier Park is known to be a fantastic place for viewing big cats, one of them being the famous black-maned lion of the Kalahari. Cheetah and leopards are also being seen regularly and with some luck one might encounter the rare Southern African wildcat. Other predators like the spotted and brown hyena and the jackal are frequently spotted.

Of course, the typical Kalahari antelopes like oryx, springbok and red hartebeest are abundant. Large herds of eland antelopes can be found as well as kudus, steenbok and many more. Giraffe are found mainly in the western parts of the park around Mata Mata.

Very popular are the cheeky suricates. As they are forever looking out for danger, but don’t regard humans as dangerous, they pose for wonderful photos.

The border running through the park is unfenced to allow wildlife to roam freely throughout the park. Human interference within the park is kept to a minimum, apart from a few wind pumps filling up waterholes, where game viewing is excellent.

Leopard in the Kgalagadi Transfrontier Park

Suricate group having a watch

Rainbow during a thunderstorm in the KTP

Accommodation and Camping in the Kgalagadi

Some comfortable, fully inclusive lodges are found within the park, as well as numerous rest camps. Additionally the park offers many campsites. Drinking water, food supplies and fire wood have to be brought along. Most roads can only be travelled by 4x4.

On the South African side the restcamps Twee Rivieren, Nossob and Mata Mata have service stations and basic supply shops.

All lodges on the Botswana and South African sides can be found here.