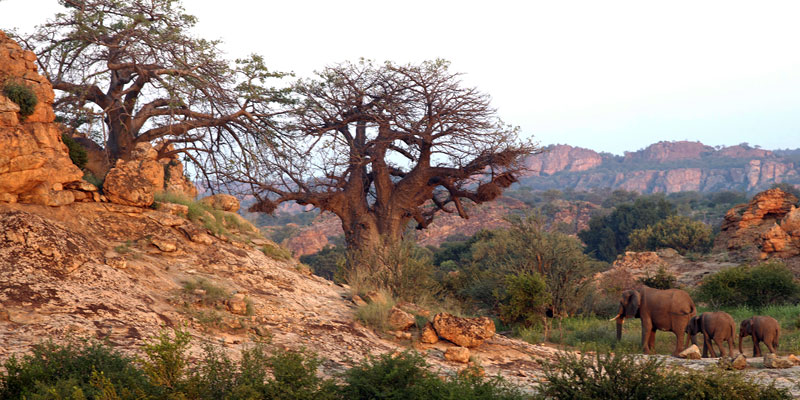 The Tuli Block is situated in eastern Botswana within a narrow strip along the Limpopo River in the border triangle of Botswana, South Africa and Zimbabwe. The majority of the land used to be farm land and is still owned privately, albeit it has now been touristically developed as private game reserve called ‘Northern Tuli Game Reserve’. This area within the Tuli Block consists of several, private reserves, so-called concessions.

The ‘Northern Tuli Game Reserve’ has developed into an important safari destination over the last years. Practically squeezed between South Africa and Zimbabwe the landscape differs greatly from the other typical safari areas in Botswana: Here you have real landscapes, whereas the rest of Botswana is rather flat.  The ‚Northern Tuli Game Reserve‘ is rocky with large rock formations and gorges, many large and old trees and insel mountains. All this, as well as the largest elephant population on private land (approx. 1200) gave the area the name ‚Land of Giants‘.

The elephant herds are being seen as ‘relaxed’ and one can approach the juveniles relative closely without danger. Apart from elephants viewing of other large mammals is excellent, for example giraffes, waterbuck and elands. The ‚Northern Tuli Game Reserve‘ is also known to be the best area to view leopards. But also lions, cheetahs and hyenas gather to feed on the abundance of antelopes.

The remote Tuli Block is an all-year-round travel destination. During the dry winter months, the green vegetation recedes and offers good game viewing opportunities at the water holes, especially regarding the shy leopard. During the humid and warm summer months not only passionate bird watchers get their money’s worth.

Also historically or rather archeologically speaking, the Tuli Block is of interest. The Solomon’s Wall, a 30-metre-high and 10-metre-wide basalt cliff is very photogenic.  Throughout all of the Northern Tuli Game Reserve archaeological finds of the stone age, the iron age and into modern ages have been discovered. Rock arts of the San can be visited in the Motlhabaneng area.

Elephants and Baobabs in the Tuli Game Reserve

Accommodation and activities in the Tuli Block

The infrastructure of the Northern Tuli Game Reserve is very good, several great lodges can be found offering accommodation and activities. In contrast to the other game reserves in Botswana nocturnal game drives are allowed. However, this only goes for guests booked in one of the lodges, otherwise the Tuli Block may only be traversed in transit.

Another popular safari in the Tuli Block is horse riding with accommodation in comfortable or rustic tents. Riding experience is a prerequisite, as guests spent 4-6 hours daily on horseback accompanied by experienced guides.