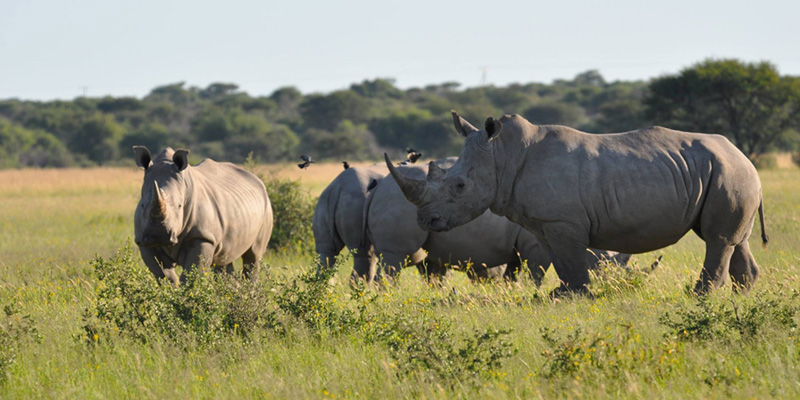 An extraordinary overnight stop in Botswana’s east, where you have the possibility to get into close contact with the nearly extinct black and white rhinos!

The Khama Rhino Sanctuary is a wildlife protection area of 43 km², founded in 1992 for the protection of the endangered rhinos. This area used to be known for its abundant wildlife.  Population of the area and cattle farming reduced wildlife numbers severely. The community-run protection area aims to rehabilitate former numbers with the focal point on the protection of black and white rhinos. About 40 rhinos roam the flat protection area which makes them easy to observe. The nearly extinct species are being guarded day and night and an electric fence with watchtowers surrounds the complete sanctuary.

Wildlife in the Khama Rhino Santuary

The infrastructure is very good, the Mokongwa Camp offers nice chalets with hot water and showers, the Khama Rhino Sanctuary Lodge has 8 chalets and 13 campsites. Apart from black and white rhinos, jackals, wildebeest, different antelopes, giraffes, ostriches and other animals can be seen during game drives.

White Rhino at the waterhole

The protection area is situated in the eastern Kalahari on the road between Serowe and Orapa, about 25 km out of Serowe.

As the rhinos are roaming freely care has to be taken. They are no tame animals and a respectful distance should be kept at all times.